Azure DevOps provides the best services for Continuous Integration and Delivery and setting up a pipeline for Kubernetes is important as there are additional steps to a normal web app deployment. This article will guide you through the application that we are going to use, building a pipeline that publishes new versions of a microservice application, using Docker, Azure Pipelines as a Code and the final details in Azure DevOps.

The source code is found in the branch azure-dev-ops branch of the Kubernetes mastery repository. The sample application contains the following services:

Maintaining a diverse set of services is an effort for every DevOps team, because of interdependency conflicts, keeping tools updated, updating the built environment when the application changes etc. But using Docker as the build tool itself removes the difficulties, as every service will have its own self-defined environment. To get a better idea of how Docker solves this issue let’s check the Dockerfile of SA-Frontend below, where we defined the image node:alpine as the build environment if other Node applications need their own environment they will define it in their Dockerfile:

This is a Multi-stage Docker build that in:

Note: The other services are built in the same manner.

In Azure Pipelines this special file is named azure-pipelines.yml and must be in the root of the repository as seen in the repo. The azure pipelines file is shown below:

Explanations of the points above:

In the script above we tag the docker images with the Build Id (a common practice as it enables to infer the last commit by checking the Tag), to make use of those you have to update the Kubernetes Manifests found in the folder resource-manifets  with the current Build Id.

This is done by replacing the placeholders:

And then publishing as artifacts, this is achieved by the job below (included in the azure-pipelines.yml):

Setting up Azure DevOps to use the defined Pipeline

To continue with this article, you need Azure DevOps (register for free), and you need to fork the sample app repository.
Continue by creating a new project in Azure DevOps and under Pipelines, Builds click New and from the dropdown select New Build Pipeline.
You will be forwarded to a guided tour:

Cancel the build as we need to edit the pipeline, click the three dots and select Edit pipeline.

Click Edit in the visual designer and under "Get Sources" change to the branch azure-dev-ops containing our Azure Pipeline definition.

Navigate to Variables and add your Docker User Id and your Password (needed to publish to docker hub) as seen in the Image below.

Click Save & queue and wait for the jobs to complete.

The artifacts of this build are the Docker Images (check out your docker hub repository) and the updated Kubernetes Resource Manifests, as can be seen in the Artifacts explorer in Azure DevOps: 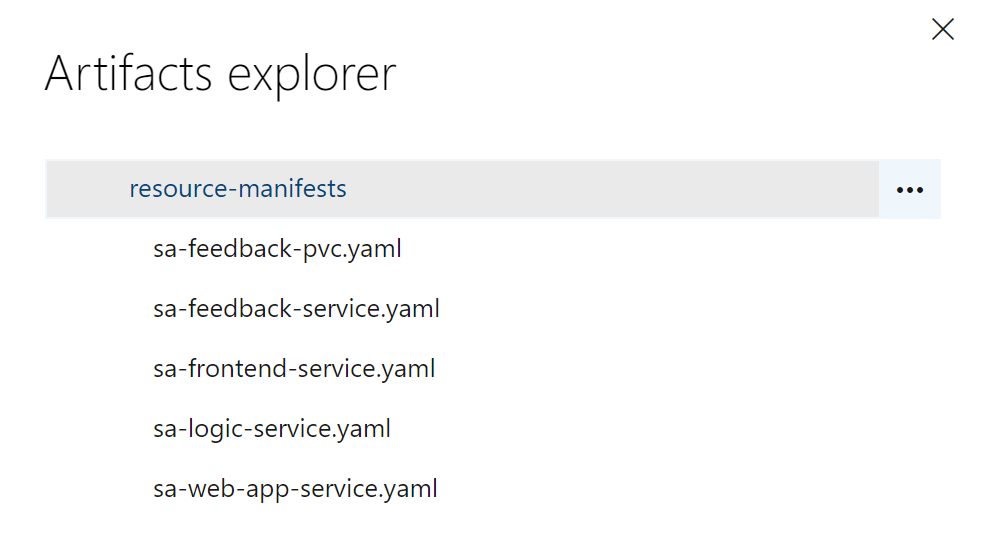 These are environment independent, in the next section, we will make use of these in our Azure Release Pipeline.

Continuous Delivery is the process of taking the Artifacts produced from Continuous Integration and deploying them automatically to a live environment (e.g. Dev, Staging, Production).

To create a release pipeline navigate to Pipelines, then under Releases, click New and from the drop-down click New release pipeline. From the Templates select Deploy to a Kubernetes cluster and click Apply, name the stage to let’s say Development.

On the Dashboard, click Add an artifact, select the Source type Build and select your project and the build pipeline we created earlier.

To update the development stage click the link below the name as seen on the image below:

By default you get a Kubectl apply task which you need to update:

In the end, it should look like in the image below:

Save the changes and trigger the build!